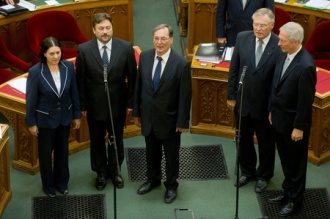 Since the 4th point of the decree dated on the 17th of May 2010 "the control of the previously arrested correspondence and verbal contact with visitors has been entrusted to the PE. Institution", - having regard to the CP. 43.§ (3) paragraph b) point - the preceptor handled II.V. as the contact person in the title of the unmarried partner.

To record II.V. as a legal representative at our institution took place in the following manner.

Named on the 17th of August 2010. requested from the institute, that Wirtass Trade and Service Limited Liability Company business matters related to the representation in order to achieve could come into contact with Hagyó inmate 2 times a month. For her request attached was an authorization registered as received by the prosecutor, as well as a notarial certificate for the existence of the consensual partnership. To submit the request and authorization empowered Szűcs and Partners Law Firm. The request and its annexes (by the law firm) arrived on the 25/08/2010 by post to the Metropolitan Penal-Enforcement Institution, following which on one hand by the commander of the institute was authorized the contact for the day of 26/08/2010, and on the other hand II.V. was recorded in the inmate subsystem as the legal representative.

II.V. in 2010. 31st of August has submitted another request, in which before the Municipal Court under case number: 19.P25425/2010. in a pending case collation requested to abreast of connection with the detainee. Her application was received at our institute on the 2nd of September 2010. The relevant authorization was handed over personally to the preceptor by detainee, who has forwarded to the Department for Registration. The authorization was taken over by the Department of Registration on the 23rd of September 2010. The commander of the institute on the basis of the application allowed the visit on the 6th and 17th of September 2010.

I inform you that the III. object of the Metropolitan Penal-Enforcement Institution visits are conducted - in the case of legal representatives - happens in speaking booths. In the booths the prisoner and the visitor are separated by a transparent plastic item, they can talk to each other over the phone. The occasion of speaking outside the booth in the foreground there is 1 staff of the penal-enforcement department, and 1 staff of the security department, however the conversation can be checked through the device (listening in). Control statements are not made​​.