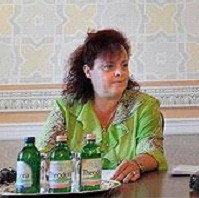 We do not know much of Szabadváriné’s carrier. You cannot find her CV on the internet or her exact date of birth and there is no information on her studies. The only thing which we know for sure is that she played a significant role in the BKV-case as the head of department of the Special and Economic Affairs of the Metropolitan’s Prosecutor’s Office. She also took part in other metropolitan investigations in 2010. After this, she became one of the senior advisors of István Tarlós. However, she took this position under her husband’s family name, which seems to be logical if we take into consideration her doubtful cases.

Working at the prosecutor’s office

You hardly can find her name in the web. There is no CV available under her maiden name, Katalin Vámos or as Szabadvári Ottóné. There is only a few information about her prior cases as a prosecutor.

She represented the accusation in Sutka-case in 2004, against Rita Csík journalist at Népszava. After this, Hungary was received an international blame saying that in Hungary there are too many lawsuits against journalists.

She also represented the accusation in the case, where the accused filmmaker strangled a cat and she also gave an interview in the UD Zrt. case, in which she declared that her office rejected the claim of the former director of the National Security Office.

Last but not least she was participating in the first phase of the BKV-case, as she is the head of the department of the special cases in the summer of 2009. Therefore, she was the one who undersigned the petition of having put Miklós Hagyó into pretrial detention.

Tarlós turns to the prosecutor’s office.

The scandal on the dismissal payments in BKV exploded in 2009, prior to the elections. Of course, Fidesz used up the situation and kept on attacking the metropolitan’s coalition. The first reports were taken by the prospective mayor, István Tarlós. He turned to the prosecutor’s office on July 29, 2009 in connection with the dismissal payments at BKV.

The case immediately landed at the desk of Szabadváriné

Less than one week passed since Tarlós took a report but the prosecutor’s office started to handle it as special case. Being the head of the department of special cases, Szabadváriné’s supervision covered the investigation in BKV-case.

However, it is interesting that this information came to light the next year, when the prosecutor’s office reported to MTI that the investigation against BKV is treated as special case for a half year. No one knew that the case is in Szabadváriné’s hand until that time. Of course, in the winter of 2010 the press was loaded with leaked confessions, arrests of BKV personnel so Szabadváriné’s position as an important information got lost.

The arrests of the other accused were also initiated by Szabadváriné. She undersigned the pretrial detention order of Éva Horváth, Ottó Lelovics and Miklós Hagyó.

Thanks to Szabadváriné, the forced interrogations were about to start.

After the case was taken to court it was declared that these above procedures severely violated the law.

Numerous accused and witnesses testified that their confessions were made under forced interrogation. Policemen however threatened them with arrest unless they confess against Hagyó. BRFK guided the interrogation not only of the accused but the witnesses of BKV-case too.

That’s how the contradictory police documents, scraped confessions, false dates, lost or forged papers were prepared. Now, we are taking in line how the authorities violated others human rights, threatened and humiliated them, thanks to Szabadváriné’s signature.

Police took into custody Éva Horváth, former spokeswoman of Hagyó, in January, 2010. Also Tibor Zelenák, former head of the communication department, Miklós Regőczi former and Tibor Bolla actual deputy general manager were interrogated as suspects. Miklós Regőczi was told in the elevator what to say against who, in order to avoid the pretrial detention. Even the investigators were complaining about the investigation since generally firstly the authorities collect evidences and then they took the accused into custody. In this case however the accused were named firs, without evidences.

The police took Attila Antal and Zsolt Balogh, BKV general managers, into custody after all the advisory contracts were collected at the seat of BKV. The charge was misappropriation. After four days of the accusation the press released that Antal and Balogh took confession against Hagyó.

Antal declared before the court that his confessions were made under police pressure and he let the police falsify the minutes in order to avoid the detention. He apologized to Hagyó, Demszky and Mesterházy for this at the court hearing.

Then perhaps it is not surprising that Zsolt Balogh also withdrew his confession, which was the base of the accusation. He was also claiming that he confessed under pressure and made an interview to the press just to avoid the prison. “I’m not a hero. All that I wanted is not more than to go home.” – he confessed.

Newer accused came to light in February. BRFK investigators interrogated György Tóthfalusi, SZDSZ chairman of BKV management. Ernő Mesterházy however reinforced his statement saying the interrogations were illegal, forced and inhuman. Investigators pressured him to testify against Hagyó, otherwise they would not let him go home.

Miklós Regőczi, Tibor Zelenák and Éva Horváth were interrogated too and almost all of them were taken into custody at that day. For example Zelenák was previously informed through the media than the authorities would have told him the detention. During his 51 days pretrial detention he was banned to talk to his wife and three minor children.

Ottó Lelovics and Éva Horváth were also claiming about the threats and humiliation they suffered from during the detention.

For example police told Lelovics – despite that he was entirely cooperating – to bring “a lot of stuff” as he needed to stay there for a while. They let him go at that time but after a couple of months, detectives stroke down on him in a sunny day in downtown. Being leashed, the detectives were standing there with him for an hour to let everyone see: Hagyó’s man got handcuffed.

Éva Horváth were also complaining about her detention’s circumstances, where she was called Jewish, she was threatened and humiliate her by shouting “keep cleaning Jew”. They wanted her to testify against her bosses. When she rejected, detectives took her back to a cell.

After his immunity ceased to exist, Miklós Hagyó was arrested and this happened on May 14, 2010. Three days later Szabadváriné launched a petition to order the pretrial detention of him.

Szabadváriné’s role in other metropolitan cases

István Tarlós turned to the prosecutor’s office on August 19, 2009 as he found several misuses at metropolitan companies. He was speaking about five cases but he added: “I’m not sure if this is the end.”  Tarlós then revealed that he takes other cases of public utility companies into consideration.

Tarlós talked about Éva Horváth’s dual employment for the first time. He insinuated that she received extra payment, premiums…etc. and he added: “BKV has been paying 23 million 600 thousand forints to Éva Horváth since February, 2007. It is obvious that she was dealing this case behind the deputy mayor.” – said Tarlós ironically.

Szabadváriné holds the lawsuits against the metropolitan companies.

Tarlós’s “intuition” worked and numerous investigations were started in 2010 against certain metropolitan companies. First these cases were handled by the economic crime division of BRFK but then these cases were also landed at Szabadváriné’s special cases department. Consequently, Szabadváriné supervised the cases of FKF, Főkert, metropolitan’s spa company and Főtáv.

Szabadváriné’s department raised a charge against these companies.

Similar to BKV-case also in these cases some disquieting details came to light regarding the police investigations.

FKF – Metropolitan Public Space Maintenance Plc, was charged with misappropriation. After a couple of months of investigation, Péter Bielek and five associates were accused. But see first what police meant under “data collection”: Police first told Bielek they did not charge him and wanted him to cooperate. His interrogation lasted five hours and they were curious to know information against Hagyó, Demszky and Ernő Mesterházy. He said later that he was scared not to go home so he undersigned a falsified minutes according to the detectives’ will. Despite of the police’s promise, his confession was published in Magyar Nemzet daily so he withdrew his confession. Obviously this could be the reason why Szabadváriné’s department accused him with 70 million forints damage in Pusztazámor, which lawsuit is still pending.

Főtáv Plc – investigation started in May, 2010 upon the report of a private person.

Lajos Kovács, general manager of the company at that time was taken into custody then to pretrial detention as of July 20, 2010. It is an interesting detail that Hagyó allegedly claimed some “membership fee” from Főtáv too. It has to be noted that this information was given by a top criminal.

Főkert – BRFK launched an investigation against this company on June 7, 2010 with the suspicion of misappropriation. Demszky, boss of Hagyó, however was interrogated only in this case, which is an interesting detail. It is also weird that Ottó Halász interrogated the Mayor in his office at the Town Hall. Ottó Halász was the one who interrogated Hagyó and took part in the interrogation of Bielek and Kovács. Thanks to his enthusiasm he was appointed to the head of FKF security directorate.

Hagyó’s case was taken over by the central investigative prosecutor’s office, while the others were handled by Szabadváriné who launched indictments accordingly.

Szabadváriné changed place and went under the protective wings of Tarlós.

After the indictment against the metropolitan public utility companies, Péter Polt general attorney moved Szabadváriné. She was relocated to the Pest County Prosecutor’s Office as a regular prosecutor instead of her previous job, where she directed an important department at the Metropolitan’s Prosecutor’s Office.

Soon after this, Szabadváriné left the prosecutor’s office. We will never know the reasons of the breakup.

under Tarlós’ wings with a new name

She did not have to be unemployment for a long time as she – having changed her name to dr. Szabadvári Péter Ottóné – started to work in Tarlós’ office as chief advisor, right on the next day after leaving the prosecutor’s office.

The recognition of Szabadváriné’s work is reflected in the figures too. Assigned to the team working under the mayor are entitled - of course – for high salary. In fact, in addition to a monthly salary of 800 thousand forints, Szabadváriné has been repeatedly rewarded each year. As an employer, being employed for a few months and she won HUF 800 thousand and 900 thousand prizes in 2013. In 2014 she also bagged a half a million forint reward from Tarlós.

It is not only Szabadváriné, who earned some advantage with the BKV-case. Many of the investigators, detectives started to work directly or indirectly to Tarlós after 2010. Some may try to hide his history, while some undertakes it openly.