A proposal from the Central Investigating Chief Prosecutor's Office on November 10th, 2010 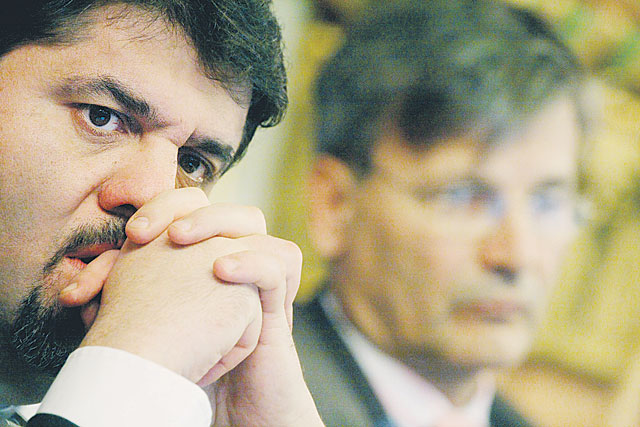 In a criminal organization that committed a particularly large financial detrimental misappropriation of funds and other felony criminal offenses against Miklós Hagyó, and his companions at the Central Investigating Chief Prosecutor's Office on No. Inv. 4777/2010. ongoing criminal case based on the Cp. 211.§ of (1) paragraph

that your protégé, in respect of Miklós Hagyó suspect, that the subject of the extension of pre-trial detention beyond six months a meeting will take place before an investigative judge operating under the the Pest Central District Court.

In a criminal organization that committed a particularly large financial detrimental misappropriation of funds and other felony criminal offenses against Miklós Hagyó, and his companions at the Central Investigating Chief Prosecutor's Office on No. Inv. 4777/2010. ongoing criminal case herewith the investigation's documents are attached, at the same time

suspect pre-trial detention in the Cp. 129.§ of (2) paragraph of b) and c) points contained reasons, with three months, however, not more than until  pending a decision of the first-instance court during the trial preparation,

The suspect's Miklós Hagyó alleged against offenses facts, its legal classification and its underlying circumstances, since the imposition of coercive measures are expanded,  since the last extension of pre-trial detention however, no substantial changes occurred.

So far according to the investigation, at the Metropolitan Municipality exercising ownership rights over BKV Co. persons occupying various positions - their own or their acquaintances in order to promote their undue financial and economic interests - directly or with the assistance of accomplices to the senior officers of BKV with asset management powers instructions were given, or influenced their decisions in such a way, that with intentional violation of their asset management obligation to the BKV make disadvantageous asset management decisions, and as a result at the transportation company - overall, based on the currently available data, - to incur particularly financial loss. The instructions given, those intermediaries, as well as persons involved in decision making and implementation, their criminal offenses for extended periods, in an organized way - knowing of each other's corrupt activities, for each sub-tasks divided among themselves - were committed.

Of the criminal offences in committing in organized way as outlined above Miklós Hagyó, former Deputy Mayor of Urban and Asset Management, resulting from his  position abused his power, cooperated by giving illegitimate instructions, namely in the operation of a criminal organization occupied leading role.

In this way what took place - among others - with AAM pl. and with CC Soft Ltd. incompatible with the goals of the asset management of BKV, economically unnecessary and unreasonable contracts concluding, as well as the payment of the quid pro quo.

1) Based on the currently available data, Miklós Hagyó instructed Attil Antal CEO of BKV, to conclude the contract with AAM Plc. datred on the 24th of January 2007,  to perform analytical work relating to the investment of Metro 4 with separate budget, in the value of 50 million forints. To the material prepared by AAM Plc. was necessary, that Miklós Hagyó could use it on his report prepared for the Committee on Budgets. Based on this contract  49.484.400 HUF was paid out. For BKV it was an unnecessary and unjustified expenditure, because the payment should have taken place from the Mayor's Office budget provided to Miklós Hagyó.

2) Miklós Hagyó can be reasonably suspected with that to his instruction, as well as puting pressure on Zsolt Balogh Chief Technical Officer, in spite of to the essential requirements is inappropriate and work not being carried out in 2007 December signed the fulfillment of the suburban passenger information system in order that CC Soft Ltd. unduly obtain the amount of the final invoice, in the value of 39,6 millon HUF + VAT.

These acts concurrent to the CC. 319.§ of (1) paragraph, and according to the (3) paragraph of c) point, qualifying particularly high pecuniary disadvantage causing misappropriation felony suitable for the determination of reasonable suspicion, which the suspect of the Criminal Code 137.§ according to point 8. committed in a criminal organization.

3) Miklós Hagyó also reasonably suspected by, as the urban and asset management Deputy Mayor of The Municipality of Budapest, abusing his official position in 2008 March instructed Zsolt József Balogh the acting CEO of BKV, to give him annually 15 million HUF. In order to underline his demand, Miklós Hagyó, envisaged the prospect, that if Zsolt József Balogh doesn't hand over the requested amount, then he will make his life impossible because of that certificate of fulfillment, which he improperly issued to CC Soft Ltd. in December 2007 to the instruction of Miklós Hagyó.

Miklós Hagyó, with this threat, as well as by him showed continuous violence, peremptory behavior, generated fear in Zsolt József Balogh, who as a result of this, as an undue advantage both in 2008 and 2009 allocated 15-15 million HUF to Miklós Hagyó. This act of Miklós Hagyó, based on the CC. 137.§ 1. point j) subsection committed as an official person.

This act concurrent to the CC. 323.§ of (1) paragraph and of (2) paragraph c) point qualifying person committed extortion felony suitable for the determination of reasonable suspicion.

The well-founded suspicion is based on a large number of suspects and witness statements, of on-the-spot interrogations, presentation of identification and Minutes of confrontation, and a large number of documentary evidence and data acquisition activities of the authorities conducting investigations supported by the the outcome of the prepared reports.

The great diversity of - with complicated personnel and material activity relationships - in criminal case ongoing criminal investigation the Central Investigating Chief Prosecutor's Office for further large number of suspicion of crime contractor and agency contract, and based on employment, paid to employees as wage allowance pursuing extensive investigation.

Based on the available data the conclusion of contracts, as well as employer's decisions have been taken decisively can be made for that period, when Miklós Hagyó as the Deputy Mayor of Urban and Asset Management the above mentioned to make decisions and implement asset management decisions - directly, or assistance of accomplices - had a decisive influence.

The last stage of the investigation arose data to that perspective, that belonging to Miklós Hagyó's acquaintances or certain individuals related to political activities, as well as companies the suspect, or to the intercession of members of his cabinet led by him, having regard to his instruction obtained for the BKV Co. economically unjustified assignment. In relation with these companies and individuals the investigation is still ongoing, which resulting in a more well-founded suspicion of criminal offenses may be communicated.

During the extensive investigation thereafter may take place in many cases provided an incomplete documentary evidences and other data house search, supplementing them by requests and data acquisition activities, affecting the other area of ​​expertise, obtaining of judicial expert opinions, and with certain economic events related witnesses and suspects continuous interrogation, and confrontations. In this scope noted, that in connection with the AAM contract for the request of defense lawyer of the suspect at the procured documents presentation Miklós Hagyó suspect, was not able to specify supporting his defense of the alleged contractual provisions, so  in this respect - besides waiting for the accused notice - also further procedural steps may be required. As a result of all these investigative activities with Miklós Hagyó, - respectively with more of his companions - against facts communicated in the previous accusations in the near future other significant extent may expand, and the suspect (s) of charges brought against of criminal classification may also get more severe.

The general and specific reasons of pre-trial detention - the coercive measure ordering and extending, as well as due to the defense appeal acting second-instance courts in conformity with the order set out - still remain in place.

Imposition of burden against Miklós Hagyó suspect - consisting of several sub-actions - crimes for each outstanding material weight (all offense from two to eight years punishable by imprisonment), as well as due to the expected magnitude of punishment for committing in criminal organization (the upper limit of the punishment can be up to sixteen years imprisonment) subject to reasonable grounds for believing, that the suspect in case of leaving at large, would attempt to withdraw himself from the criminal proceedings.  This risk is enhanced by that the serious offenses during the ongoing investigation data has so far revealed infringement and violate a very serious economic and other interests.

The escape and hiding, as well as that circumstance in relation to Miklós Hagyó, at the same time furthermore allows us to infer the risk of the undermining of the criminal proceedings, that properties on his name and also his interest in other economic companies has been transferred to other persons, which clearly indicates of asset rescue. Finally, during the investigation data may arise that Miklós Hagyó, from criminal responsibility, he wishes to leave abroad.

Furthermore it can reasonably be assumed, that in case of letting at large Miklós Hagyó suspect, the already communicated in the suspicions, as well as the full-yet-undiscovered transactions at BKV Co., respectively with the involved individuals of certain economic companies, - in particular, the circumstances of the contracting and as consideration unduly paid sums of money and its further predestination - in order to avoid the impeachment of criminal liability he may collude, or may influence in their testimony the persons who are intended to interrogate, and thus, would significantly complicate the extremely divergent evidence with the destruction of the have not yet received documents and other evidence, as well as the proof of assets advantages of proceeds of the crime. This information is confirmed by the circumstance, that Miklós Hagyó suspect, in the penal-enforcement institution with the use of various corporate law and court representation authorizations on several occasions without control came into contact with XXXX, designated as his unmarried partner, whom within the meaning of the Criminal Procedure Law, (Cp. 43. § of (3) paragraph of b) point, only under supervision and control could come into contact. In addition, Miklós Hagyó suspect, in the exercise of his rights of contact evidence of misuse of other conditions have emerged, therefore the Central Investigating Chief Prosecutor's Office decided restriction of contact rights of the accused.

The testimony of witnesses and the accused persons allude, that Miklós Hagyó as deputy mayor has peremptory personality, managers are directly related to him fear the retaliation fully implemented his instructions, therefore, reasonable grounds for believing that in case of leaving him at large, with his  influence the forthcoming conduct of investigative actions would make considerably more difficult.

Based on the described, in respect of Miklós Hagyó suspect, the pre-trial detention is general, and in Cp. 129. § of (2) paragraph of b) and c) points specified particular reasons persist - those strengthened in part -, therefore the extension of coercive measures are necessary and justified. Subject to the reasons detailed above the goals wished to achieve by the coercive measure in respect of Miklós Hagyó suspect, remains only with the full withdrawal of personal freedom inherent coercive measure, that is, can ensure by pre-trial detention, the current stage of the proceeding for less severe coercive measure I see no basis.

In this scope I wish to remark, that according to the expert opinion of the seconded forensic experts seconded by the request of defense counsel, the medical condition of suspect Miklós Hagyó, an urgent hospital treatment is not needed, within the health services of PE can be provided properly.

Subject to the expert's statement arrangements have been made the development of detention conditions adjusted to the suspect's state of health, (designation of other station house), within this framework, taking into account comfort aspects (eg, providing sporting facilities) there is no opportunity, and to these needs cannot give basis for less severe coercive measures.

The defense counsel of Miklós Hagyó:

The suspect is held at: the Metropolitan Penal-Enforcement Institution

About the place and time of the meeting I notified the suspect and his pleader in writing and by fax.