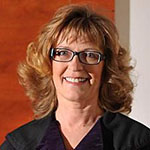 During the period of the second Orbán administration the Parliament elected Tünde Handó the Chairman of the OBH (National Judiciary Office) which replaced OIT (National Juidiciary Counsel). She received 258 yes votes on December 13, 2011.  Handó’s appointment lasts for 9 years commencing from January 1, 2012. She promised a more transparent and effective judicial operation.

Being appointed to this position she had to face with political critics because of her husband and her connections to Fidesz-politicians. Her husband, József Szájer is one of the key-member of the public-law transformation led by the second Orbán administration.

She was a court drafter of the Metropolitan Labor Court then she became a court secretary. Later she was working as appointed judge since 1st May 1991 and then she became the Chairman of the Metropolitan Labor Court since 15th April 1999. She has been acting also as lecturer teacher of the labor department of ELTE Faculty of Law since January 1999. She is a honorary county court judge since 15th July 2003.

She got married to József Szájer – vice-president of Fidesz and EU Member of Parliament - in 1983. Their child Fanni was born in 1987.

The new elected chairman of OBH plays a significant role in relocating politically fastidious cases to other courts. One of the best examples is the relocation of the criminal case of the former Deputy Mayor of Budapest which action made it possible that FIDESZ won the national elections with ⅔ majority in 2010.

According to the data published on OBH website, Tünde Handó issued that presidential recommendation on 20th February 2012, which collects the criteria to be considered at the relocation processes. Despite of this Tünde Handó already decided on the relocation of BKV-case on 16th February without any criteria system and the chance to appeal.

Tünde Handó as Chairman of OBH appointed the Kecskemét Tribunal to hear the case at first instance where the trial began before the summer holiday and according to the court’s report it should end in 18-24 months. Therefore the decision of first instance would be announced in the final campaign sprint of the next ordinary national elections and/or the municipality election.

This is not the only case when a trial at Kecskemét Tribunal ends in a period when the timing serves the best interest of Fidesz. Prior to this, in the case of János Zuschlag this tribunal delivered the decision of first instance just in March 2010 at the height of the national parliamentary elections campaign. After Zuschlag, Hagyó’s case was also landed at Kecskemét Tribunal. Answering to that journalist question of “what are you doing in order to avoid even the pretense of political prejudice in Hagyó-case” the Kecskemét Tribunal replied the followings in a news conference: “We do not do anything. Nothing in administrational way. Neither the chairman of the tribunal nor any of its leaders may horn in the decision of the appointed judge. (…) In administrational way the only we can and have to do is to provide to deliver a decision in a reasonable time. The judge is totally independent, separate and delivers the decision only on the base of his or her conscience, conviction and the law.” This is to note that Szabolcs Sárközi’s – spokesman of the tribunal – father is a Fidesz-politician in Kecskemét.

According to the official reasoning the reason of the relocation was the condition of the Metropolitan Tribunal as it was so overloaded that it could not have judged this case – a socialist politician is involved – in due time. This reasoning however became questionable when it was found that the ratio of the special cases at Metropolitan Tribunal is 60% while at Kecskemét Tribunal is 56% so Tünde Handó won only a couple of percent with her decision. Many criticisms took place against Handó and the OBH regulation because of the right to appoint a judge. Miklós Hagyó and accused associates turned to the Constitutional Court and the European Court of Human Rights against the decision of Tünde Handó. Due to their defenses’ standpoint constitutional fundamental rights were infringed by relocating the case.

Defense believes that the right to legal judge infringed since the relocation happened without excluding arbitrary and without objectivity and transparency. Due to their standpoint also the obligation of impartiality was infringed since the relocation was signed by the Chairman of OBH also wife of József Szájer and the appointed court had already delivered a serious decision in Zuschlag-case in similar political context. Furthermore, the right to legal remedy was also infringed since the law failed to provide effective legal remedy against the decision on appointing another judge – as the brief contains.

Although the Constitutional Court considered the possibility of the relocation of the cases as being against the Fundamental Law, the governmental 2/3 incorporated it to the articles of the Fundamental Law. This was also terminated by the Constitutional Court – with the separate opinion of Mária Szívós – it’s true that now they judged it unconstitutional upon formal reasons and did not inspect it in the merits. The only problem was then that definitive regulations are called provisional stipulations. Despite of this the case still remains in Kecskemét.

The Hungarian Helsinki Committee and the Hungarian Civil Liberties Union are extremely concerned about the regulation which enables the Chairman of OHB to appoint a judge and court against the law in order to hear the case and these organizations called the Chairman not to grant such requests in the future.

The Constitutional Court heard Tünde Handó on 23rd April 2013, during the judging of the constitutional complaint lodged in BKV-case. Chairman of OBH said in a news conference that she asked for a hearing at Const.Court in order to clarify the misunderstandings and errors.

Miklós Hagyó wanted to be there at the hearing. Defense requested the publicity of the hearing in vain. She was heard behind closed doors, without public against which the Eötvös Károly Institute, the Hungarian Helsinki Committee and the Hungarian Civil Liberties Union were protesting. They believe that the fact that the Const.Court heard the Chairman of OBH in closed session infringed the right to fair trial, the right to know publicly the decision process of the public authority and the right to free access to information of public interest. The Const.Court ignoring the protestations encrypted the record of the hearing to 10 years.

On 2nd December 2013 after 224 days passed the Constitutional Court established again that the relocation of cases is against the Fundamental Law and also breaches international conventions. According to the standpoint of the Const.Court they worked on this case as they wanted to subject the consequences other pending proceedings too. OBH interpreted the decision just on the contrary meaning that the decision shall not affect pending cases. Handó’s OBH declared not to interfere with the judiciary's business: It is the acting judge who can decide the effect of the Const.Court’s decision on the pending case. Besides, Handó defended the independence of the judiciary. Kecskemét Tribunal established its incompetence in its decision of 16th December 2013 and so it relocated the BKV-case to the Metropolitan Tribunal.

Anyway, Hagyó had already won a lawsuit in Strasbourg when Handó was heard by the Const.Court. According to the decision of the European Court of Human Rights the Hungarian authorities infringed many laws by keeping him in such conditions. Mária Szívós as Chairman of the counsel of the Metropolitan Court confirmed the pre-trial detention of Miklós Hagyó three times, automatically, without critic on the basis of a police report which never existed. Furthermore, Szívós ordered more severe coercive measures against Hagyó’s accused associates (e.g. Ottó L., Éva H. and Miklós R.).