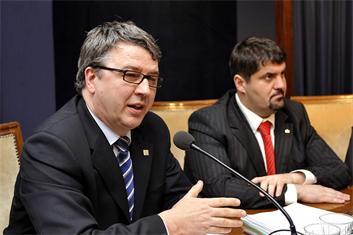 In his indictment, and my burden imposed on acts not committed, I'm innocent and I ask my dismissal from both of these counts.

During the investigation I was interrogated as a suspect with about 14 kinds of facts, and 12 of which are in connection with the proceeding that was terminated.

The investigation terminated about me had no incriminating evidence that was included in the file. It is not clear, how these facts are related to me, and how my suspicions took place, but the same applies to the two written acts in the indictment.

The criminal proceedings against me are gravely illegitimate, and I find it to be based on a preliminary concept. The whole process is well characterize, that according to the indictment point  I/C, until the preparation of the indictment in connection with the act I was included as instigator, while the act had no offender. Because during the investigation, the authorities did not suspect anyone as the offender, not even those named who I would incite to commit an offense. The contract signed on behalf of the BKV CEO, eventually to the proposition of my pleader, after the completion of the investigation, interrogated as a witness.

Well illustrated by the work of the prosecution, that on the 32nd page of the indictment I’m no longer the instigator, but I’m included as the offender, despite the fact that from the accusations text and from the written classifications, part of the indictment concerns me, furthermore the from the 19th page last, the 20th page first and the 24th page fourth paragraph clearly shows, that the prosecution would impeach me as the instigator. I note that Zsolt Balogh and Attila Antal had become the accused by the prosecution - completely illegally - particularly a significant financial loss qualified criminal offense, with that they did not even suspect them. This is the particular cleaning contract,  which according to the indictment involved me.

For the incompetent is also obvious, that if after the completion of the investigation they can't "find" the offender from the cleaning contract, that then they cannot prosecute against me.

The complete inability of the prosecution also indicates, that while the indictment alleges that III. accused failed to take the necessary steps for the influence-free  conduction of the procurement process, in the context of the cleaning contract they didn't obtain the tender documents, persons participating in the tendering procedure, none of the decision-making persons were interrogated. It is clear, that these evidences would also confute the content of the indictment.

If the investigative material does not contain any of the public procurement procedure,

An absurd and nonsensical statement, that a procurement contract created as a result of  instructions I have given to who didn't even signed the contract, and who signed it, according to the prosecution didn't know about anything, while in the indictment it is not included, that the procurement process by who and how would affect, that according to the indictment III. accused didn't prevent.

The two contracts the indictment  related to me - Montana Co. and the PQS Plural  Ltd -

I had nothing to do with, neither of those preparation, nor those negotiations, or in their procurement process I didn't participate. About the contracts I never talked to anyone, individuals written in the indictment I didn't incite or instruct for anything. This may be the reason, the investigating of the affairs of the BKV multi-party Committee proceedings my name never came up, no one ever asked to auscultate me there, since it was clear, that these matters were not to my knowledge.

For these reasons, these matters written in the indictment, I have no more to say.

I note that, in the indictment the section related to me about the people in connection, I made my statement during the investigation, I can not tell more about them.

However I emphasize, that the statement on the 6th page of the indictment that I was involved in a criminal organization, is untrue, with facts and with evidence not supported. The reality lacks any element of the indictment 6th page fourth paragraph, that as a representative of the mayor,  the mayor's circle related companies interests I mediated to the CEO of BKV. This finding is even not proved by the investigation material, but some co-accused person and witnesses explicitly denied.

Since I didn't know anything about the contracts, their creation was none of my business, including documents supporting the allegations contained in the indictment. There even isn't any possible evidence, and therefore I believe, that my suspicion and my detention had no legal cause, based solely on my existential political role, and served only to destroy my good reputation.

What other explanation could be that of my interrogations - because of my high blood pressure and my speech impediment were exhaustive - were more like "narrations", where the authority at length tried to convince me of the benefits of making ​​incriminating statements of others. As an example I'd mention minutes of testimony, which took place on the 26th of February in 2010, it started at 9:32AM, and ended at 8:23PM. The result of this is nearly 11 hours, and in the minutes is only two-pages, during the half-hour recording in the minutes testimony. What happened in the rest of the time, the authorities must have accounted for.

What else would justify in police detention under the law for the longest period of time, degrading, can not be classified conditions of my placement? How could that happen, that of my rural property house a search conducted four and a half months after my detention, before the extension of my pre-trial detention - contrary to the requirements of the law - took place at night, in front of my young children. The press became aware of the house search sooner then my pleader, whom they forgot to inform about it in advance.

Still fearing, but because my own and my family's fate I must say, that they continuously made ​​it clear: if I make incriminating statements against Miklós Hagyó and the Mayor, they may end my detention, and my case would be considered favorably.

I do not know who are behind the prosecution’s illegal procedure, but I am convinced that it will come out sooner or later. Despite my perceived political motivations since the beginning, however, in my police and prosecutorial testimonies to the best of my knowledge, I answered the questions correctly in everything regarding the truth. It would not make any sense - due to my speech defect, therefore difficult to understand -  repeat the same in front of the court. For this reason, hereafter, in addition to testify in the case, I do not wish to answer questions. If I feel the need thereof, I shall live with my questioning and commenting as correct.