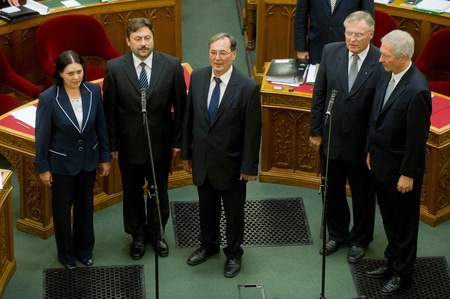 In a criminal organization that committed a particularly large financial detrimental misappropriation of funds and other felony criminal offenses against Miklós Hagyó, and his companions the Central Investigating Chief Prosecutor Inv. 477/2010. number of ongoing investigations into the following suspicion of crime data obtained has been given.

Suspect Miklós Hagyó in pre-trial detention on the 6th of August 2010 signed a written authorization specifying his unmarried partner, given the power to II.V., that before the  Metropolitan Court of Justice,  under the number 19.P25425/2010. started civil litigation case act as his legal representative. The document signed by Miklós Hagyó as the authorizer and by II.V.  as the authorized on the 12th of August 2010 in the aforementioned crime Miklós Hagyó, and his lawyer Dr. Viktor Szűcs acting also as the authorized pleader with his signature and his legal stamp countersigned  the document.

According to the available data II.V. at the time of the authorization he did not have a law degree, therefore, would have not acted as legal representative, that is, the documents in this regard - in respect of the quality of  II.V. as legal representative - contains false data. This is also supported by the Metropolitan Court information, according to which the parties in the lawsuit acting personally, didn't give mandate to their representation, from which it can be concluded that the authorization failed to provide to the court.

The false authorization in detention Miklós Hagyó, to verify eligibility of the contact with II.V. - according to the Cp.  43. §(3) paragraph - in September 2010 submitted to the Metropolitan Penal-Enforcement Institution Budapest X. District  Venyige street Object, and the Registry Department of the Institution has taken over on the 23rd of September 2010. Based on the authorization, the custodial institutions to Miklós Hagyó detainee wrongly  - on several occasions in excess way of her rights as unmarried partner, the defenders are entitled without controls -  contact opportunity has been provided.

Basis of an assessment  of all the facts the act interferes  CC. 276. § where private document forgery is suspected, which the authorization submitted Miklós Hagyó as the culprit, while the document signatory as the authorized II.V. as well as the document maker and the countersigning Dr. Viktor Szűcs lawyer,as an accomplice committed a crime.

Based on the above - in the light of the Cp. 170. § (1) paragraph - by the Central Investigating Chief Prosecutor's Office in context with the described act obtained relevant documents (documents submitted by the Metropolitan and Tököl Penal-Enforcement Institution, the informative letter of the Metropolitan Court Civil College, and Miklós Hagyó's Minutes of suspects dated on the 22nd of October 2010) for criminal prosecution enclosed herewith.